The Heritage District Mural is Finished!

Unveiling of Heritage Depot Plaza’s New Art Mural and Open Space by Gilbert Leadership Class XXI’s at Grand Opening Celebration
WHO:   Participants of Gilbert Leadership Class XXI will celebrate the unveiling of their community project which includes an art mural painted on the south-facing wall of the American Legion Merrill Mitchell Post 39 and an open space improvement with park features in the once-vacant lot immediately south of the mural. The mural depicts the Town of Gilbert in the World War I era, circa 1917, with the exception of the “Gilbert” sign, which was later added across Gilbert Road in the early 1930’s. To further enhance the project, a plaque has been created to explain the significance of the site and will be incorporated in the Heritage District History Walk created by last year’s Gilbert Leadership Class XX. Various private donors, including members of the current class, and Gilbert Leadership alumni and past Town Council members John Sentz and Linda Abbott have purchased benches for installation in the open space.
WHAT: To honor the new space, a celebration will take place with an official program, including remarks by  Mayor John Lewis of the Town of Gilbert; Commander Skip Erickson of the American Legion Merrill Mitchell Post 39; Mary Ellen Fresquez, Member of the Gilbert Historical Museum Board of Directors; and Kathy Tilque, President/CEO of the Gilbert Chamber of Commerce.  Joining the ceremony is local, seasoned artist and Gilbert Visual Art League member, Mary Opat, who assisted Class XXI to craft the mural design.  Opat will be recognized for her visionary design and contribution to the class project.
The celebration will coincide with other events within Gilbert’s Heritage District, including:
Posted by Mary Opat Art at 4:48 PM 1 comment: 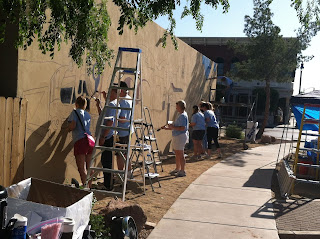 The April 6th painting day with the Gilbert Leadership Class XXI was a success!  Most of the mural wall got covered with paint and I'll begin adding details next week.  The group was dedicated and fun to work with.  The "pocket park" area next to the mural wall looks amazing with the new plants, rock and curbing.  Terracotta colored Benches will be added soon.  It will be fun to see a before and after when everything is completed! Visit my website at http://www.maryopat.com 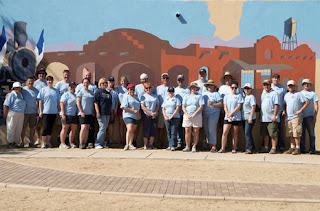 Posted by Mary Opat Art at 3:32 PM No comments: 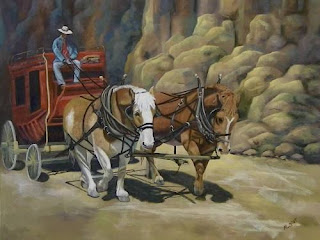 22" x 28" Oil Painting
I finished this one today.  I used a photo taken by Galen Frysinger
while visiting Tombstone, AZ and a rock wall from my imagination.
I like the play of light and shadow on the rocks and the way the horses
have cast shadows from their tack.  For more of my
paintings, follow this link to:
http://www.maryopat.com

Posted by Mary Opat Art at 2:14 PM No comments:

Please visit my web site to purchase or view my paintings: https://www.maryopat.com