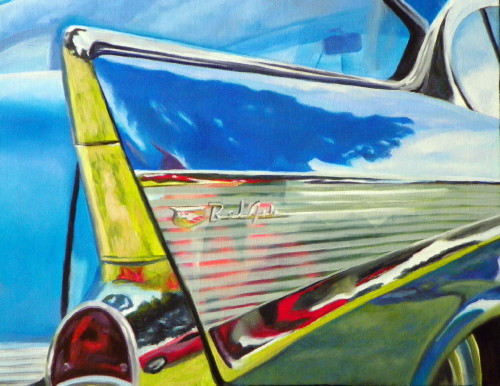 "Sweet Ride" Vintage Car Oil Painting by
Arizona Artist Mary Opat
14" x 11" Oil on Stretched Linen
Here is another painting in my series of 14" x 11" oil paintings
featuring vintage cars.  Yesterday I started a painting of an
old red GM.  I'll be posting it to my web site http://www.maryopat.com
next week.  Let me know if there is a favorite car from your past.  I'd
love to have a close up photo of your vintage car with it's story.
Life is Art...Paint Your Dreams!﻿ On My Easel  11" x 14" Blue '57 Chevy ?
I finally got back to this painting.  I'll let it dry before I put the final details
in place.  It's one of the close up vintage car series.  I've sold all but one finished
painting (Sky Blues) in the series and I'll concentrate on getting a few more
painted in the next month or so.  Thanks to my friends and family for being
so supportive of me.
Art is Life...Paint Your Dreams!

Appreciate the Angels in Your Life 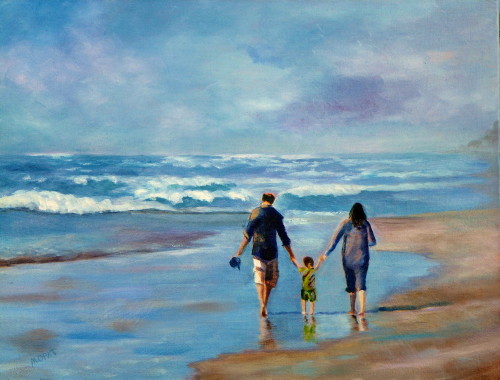 "Debbie's Day" Seascape Oil Painting by Figurative
Arizona Artist Mary Opat
24" x 18" x 1.5" Oil on Gallery Wrapped Canvas
This painting was done from a photo I took on my first trip to
Huntington Beach.  My good friend Debbie and I took a three
day road trip.  Debbie and Dale had moved from California to Michigan years
before, due a job transfer.  Debbie disliked the cold winters, so Dale bought her
a house in Arizona.  Lucky for me, it was just a few houses down the street.  Debbie
wanted to revisit the place they once lived and hoped to retire to, so off we
went to California.
Debbie and I had the comfortable kind of friendship I love.  No calling ahead needed,
just pop over for a cup of coffee or a glass of wine.  We started a dinner night with
a few of the neighbors, taking turns one night each week to cook dinner for the
group.  I envied her relationship with Dale.  They had been best friends since
they were eight years old.  Dale was happy to have Debbie spend the winters in
the sun while he stayed in Michigan to work.  She was a life saver for me.  I
had just suffered a terrible loss a month before I moved to a new state.  Debbie was one
of the first real friends I made in my new home.
Debbie lost her life to cancer just months after we said goodbye that first season.
She and Dale were on a trip to Italy when she noticed some problems   By the
time they got back to the states and got a diagnosis, her brain cancer was
inoperable and she only lasted a couple of months.  She passed in her home in
Michigan among her family and friends.
I always thought of her as an angel while she was alive and I definitely
think of her as an angel now.  I never saw her without a smile.  I painted
the scene from the beach that day and called it  "Debbie's Day" in her memory.
Appreciate the Angels in your life. Myself and Debbie on her last day in Arizona

Posted by Mary Opat Art at 9:19 AM No comments:

Yesterday I joined some wonderful people for an arts and crafts faire at a warm and welcoming home in Tempe.  The weather almost kept me from going.  Three solid days of rain in Arizona tend to dampen the spirits a little...and on Super Bowl weekend!

A few of the vendors had cancelled by the time I arrived.  The rain stopped and my friend Bonnie and I decided to set up our displays in the courtyard under the cover of a deep overhang.  Our hosts helped us with the electrical for lighting and started a fire in the outdoor fire pit.

The traffic was a little slow, but that gave us more time to visit with our guests and fellow vendors.  Around 7 p.m. our hosts invited us in for spaghetti, salads and crusty garlic bread.  We continued to get to know each other and exchange ideas over a delicious meal.

At the end of the day, not many sales were made.  On a purely monetary level that may seem to some like a failure, or at the very least a waste of time.  I came away feeling more energized and with a greater feeling of community.  Every person I spoke with inspired me in a different way.

Today is Super Bowl Sunday.  It will be a day of watching the game with my family and friends, nachos and chicken wings, and maybe a cold one (or two).  I hope we can all remember to enjoy the day, wherever we may be.  Take real joy in the people that surround you, start a new project, plan a trip.  Like someone once wrote, "Be good to yourself...You won't earn a ribbon for suffering."

Life is Art...Paint Your Dreams!

Please visit my web site to purchase or view my paintings: https://www.maryopat.com